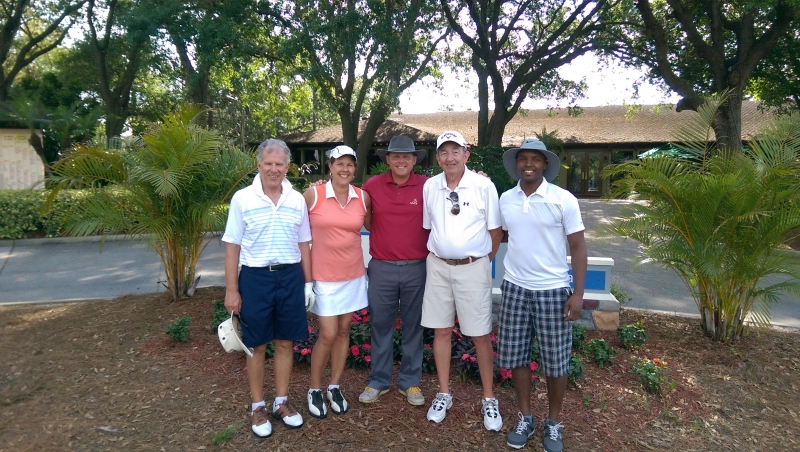 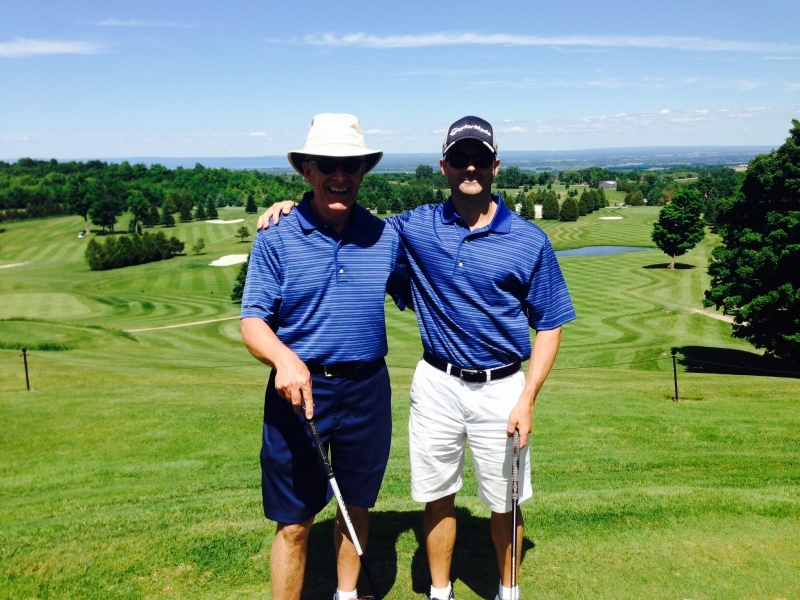 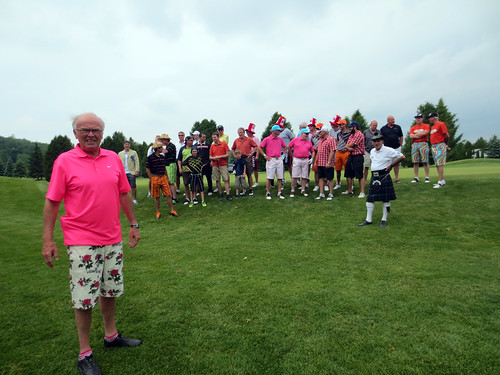 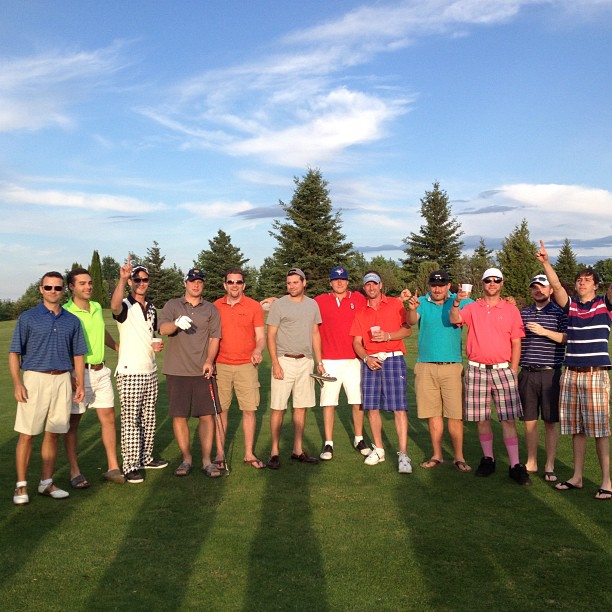 Ken and I second from left. 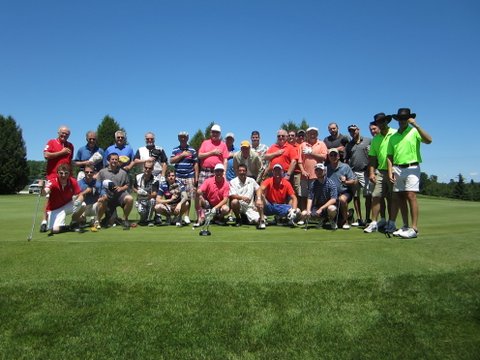 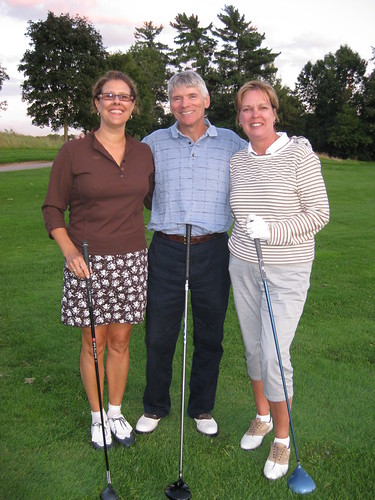 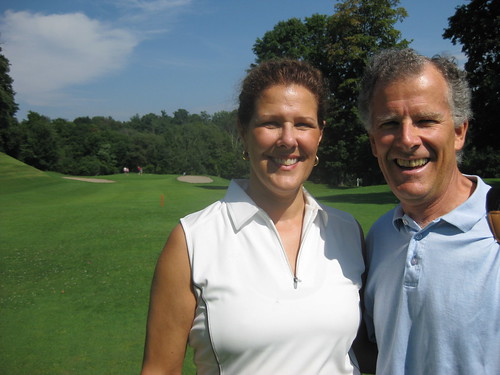 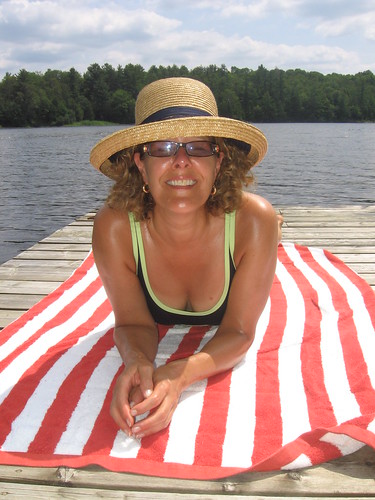 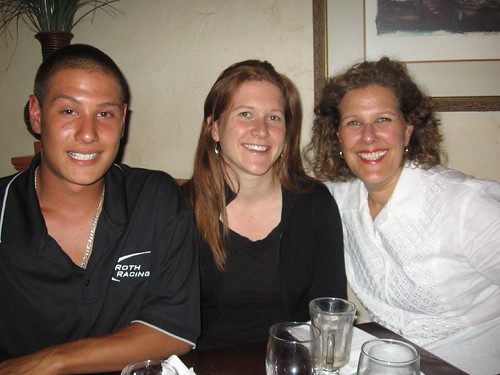 The Royal Montreal Golf Club is the oldest golf club in North America, founded in 1873. In that year, a small group of eight men sat in a dockside office and formed the Montreal Golf Club. Eleven years later, in 1884, permission was granted by Queen Victoria to use the "Royal" prefix.

The first golf course was a 9-hole layout on Fletcher’s Field, part of Mount Royal Park, which was shared by the red-coated golfers and other citizens relaxing in what was then the outskirts of Montreal.

In 1896, the club moved to Dixie, in the parish of Dorval, where it remained until the pressures of urban growth again dictated a decision to move. The clubhouse at Dixie is now the
Queen of Angels Academy for Girls.

The last move was to Ile Bizard in 1959, where 45 holes were constructed. The Blue Course continues to be ranked as one of the "100 Greatest Courses in the World".

The Club, host to the Canadian Open nine times, is proud of its history, traditions and facilities. Royal Montreal will host the President’s Cup in 2007.

Today (May 2003) Ernie Els leads the 2003 PGA tour in the number of holes played per eagle at 48. He’s also fourth in driving distance and first in putting, which may explain why he gets so many eagles. The 175th ranked player, Stewart Cink, gets an eagle once every 846 holes. For amateur golfers an eagle is probably as rare as a hole-in-one.

I’ve never had a hole-in-one but I have had an eagle. It was on the 548 yard, par 5, 6th hole on the Blue course at the Royal Montreal Golf Club. For those who know the course my drive faded slightly right and landed in the first cut in the valley just beyond the bunkers. The ball was sitting up nicely and my second shot, a three wood, went perfectly straight, landing about 100 yards from the pin on the left side of the fairway.
Continue reading

Several members of Royal Montreal Golf Club traveled to Scotland for a Father and Son tournament in June, 1989. Past President John Thompson with son Peter, Jack Jackson with son Rob (a past Royal Montreal Club champion), Rick Jackson with son Scott, and Ron Foreman with son Ken, arrived in St. Andrews on Father’s Day, the customary kickoff day for the week long event. A practice round was scheduled for Sunday and the five day competition began in earnest on Monday.

The tournament was played over five courses: Carnoustie, the New Course and the Old Course at St. Andrews, the Queen’s Course at Gleneagles, and Scotscraig. Forty-two teams from the United States, Canada, and Austria participated, with the field being divided into four flights based on combined handicap. The format on four of the five days was four ball-better ball with both gross and net scores per father and son team being recorded and full handicaps allowed. The Scotscraig round was Scotch Ball (alternate shots). Four of the five rounds counted towards the overall championship with the Scotch Ball round being mandatory.
Continue reading