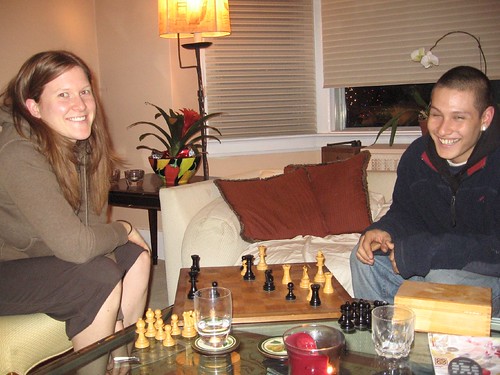 This is probably the most famous game in Chess history. Paul Morphy, on his fast rise to world champion, plays two Dukes at the same time in an opera box during a performance.
(Morphy, Paul – Dukes of London – Opera House 1855 – [Hicks,E])

1.e4 e5 Preventing whites pawn center.
2.Nf3 Develop with threats! d6 Blocks the f8 Bishop. A little slow.
3.d4! Morphy plays like a tiger! Grabs the center, and threatens PXP then QxQ after Black can’t castle! Bg4 Pinning the knight. A fancy way to preserve his castling rights.
4.dxe5 Hoping that black takes with the d pawn. Bxf3 If de then qxq and he can’t castle.
5.Qxf3 Although it is usually not a good idea to take the queen out early, white does this during a recapture so he does not waste any time. Also the queen is not blocking the knight, since it is
gone, and black has no quick way to attack the queen. dxe5 Now he can take the pawn safely.
6.Bc4 Developing a piece with a major threat….The four move checkmate theme ! Nf6 The standard defense to the four move checkmate. Note that Paul Morphy anticipated this response. You must always assume your opponent will find the best move.
7.Qb3! Usually it is not a good idea to move the same piece twice…but this is a fork…the pawn on f7 and the pawn on b7. Qe7 This move is positionaly weak because it blocks in the f8 Bishop and dooms the black king to staying in the center. It does prevent both pawns from being taken. See variation by clicking “Qxb7” box to the right to see how this variation plays out.
8.Nc3 Renewing the threat on the b7pawn. [8.Qxb7 Qb4+ 9.Qxb4 Bxb4+ White is up a pawn but with no good positional advantage. White decides against this simple line. ]
8…c6 Doesn’t develop but necessary to hang on to the b7 pawn.
9.Bg5 Pinning blacks only developed piece. Blacks development is really awkward! b5 Neglecting development again. Black hopes white will retreat the c4 bishop and therefore justify the wasted move.
10.Nxb5! The Sacrifice! Black’s development is awful and is asking for punishment! cxb5 Take the offered free piece. Let your opponent prove his combination unless you see a definite refute.
11.Bxb5+ Nbd7 The only playable move. Now look at Black’s position. Both knights are PINNED.
12.0âˆ’0âˆ’0 Castling, developing the rook, and attacking the knight all with one move! Now white has two attackers on the knight, and black has not enough when you consider two of the defenders are too valuable (the queen and the king) and the f6 knight is pinned. Rd8 The only move to help save the knight.
13.Rxd7 The fastest way to activate the a1 rook. Rxd7
14.Rd1 The last piece is developed ! Qe6 Look at this. Black has no moves. Black’s attempt is useless. Look at “QxQ to the right and see another easy win for white than the one that was played.
15.Bxd7+!! The black knight is PINNED. If it moves, the rook checkmates on d8.
[ 15.Qxe6+ fxe6 16.Bxf6 gxf6 17.Rxd7+âˆ’ This is an easy win for white, but white sees a more beautiful finish! ]
15…Nxd7 Notice that the knight on d7 is pinned. If he moves black will be checkmated on d8.
16.Qb8+!! Brilliant! Forcing the black knight to move. Now the path is wide open. Nxb8
17.Rd8# A beautiful and famous finish. White has only two pieces left…but enough to win. Notice Morphy used all his pieces in this attack. 1âˆ’0
Copyright 2003 Academic Chess