Calendar of Purple Martin Arrivals and Departures at Beaconsfield, Quebec, 1989-1998 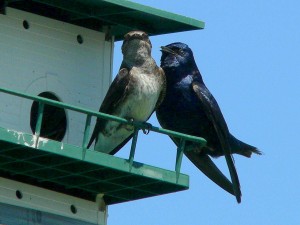 The Purple Martin (Progne subis) is the largest North American swallow. These aerial acrobats have speed and agility in flight, and when approaching their housing, will dive from the sky at great speeds with their wings tucked.

1996
Ice out of the bay end of March
Swallows arrive April 18/96
1 Martin arrives May 9
Then there are several and it is just like past years
Martins leave Aug 5 after 1 week of flying lessons, cooler summer than last year
1st flock of ducks seen Aug 23/96