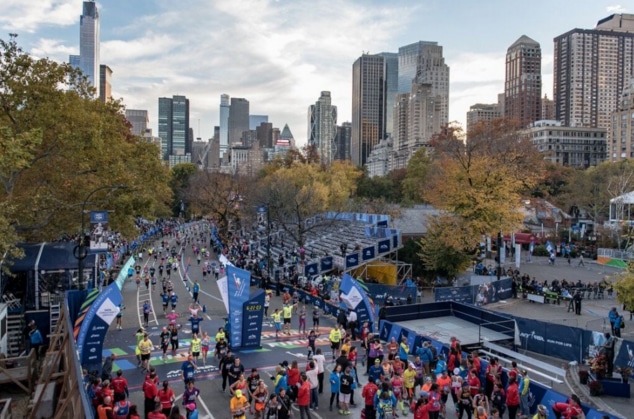 I’d almost given up on running my first marathon when I hadn’t heard from the New York Road Runners Club about my registration which I’ d sent August 1. A cold in the middle of September prevented me from running for two weeks. Then on Friday, September 30, after driving back to Montreal from a business trip to Toronto, my confirmation was waiting for me in the mail. I could run in the New York City Marathon on October 23, 1977.

I knew immediately that I had to go ahead and do it now, despite mild objections from my wife. My training picked up leading to my best week ever, October 16, 1977, 52 miles, and my best month ever, 191 miles.

I arrived in New York on Friday, October 21, to visit one of my suppliers, a manufacturer of skylights in New Jersey. Mike Vipiani entertained me well including drinks at the top of the World Trade Center, and dinner at La Scala on Friday night.

Saturday morning, after a restless sleep, I attended a marathon seminar near the Westside YMCA. Many ‘big name’ runners such as Bill Rodgers, Frank Shorter, Jerome Drayton, Lasse Viren, Miki Gorman, and Ron Hill were interviewed.

Then I visited the Runner’ s World Hospitality Suite where I watched a film of the 1976 U.S. Olympic trials. After a steak dinner I was in my bed at the Hilton on 6th Avenue by 8pm.

I had a wake up call scheduled for 6:30am but was awake at 4, although I didn’t get out of bed until 6. I showered and put on the running gear I thought most suitable for the weather that day, sunny and 45F (7C). At 7am I walked to the Westside YMCA where a shuttle bus took us to Fort Wadsworth on the Staten Island side of the Verrazzano Bridge. On the bus I met two native New Yorkers and we chatted. Later I was to pass one of them walking at mile 21.

We arrived near the Verazzano Bridge tollgate at ten to eight. It was a clear sunny day with almost no smog, but cool. After lounging around the military base cinema with hundreds of other runners, 5,000 were registered; we began to prepare for the race at 9:45.

I started a conversation with a fellow named Don from New Jersey. When I told him my goal was to run 9 minute miles he suggested we run together. At five to ten, after a last minute trip to one of the 80 portable toilets, we were instructed to assemble on the playing field. Half way into my warm up routine we were interrupted by a 25-man marching band that led us to the starting line at the bridge’ s toll gate.

After completing my warm ups I was able to focus on the 5,000 other runners, small in comparison to later NY Marathons, but twice as many as the year before. I lined up at the 4-hour mark near the back of the field. However it would only take 30 seconds to cross the starting line, much faster than most of today’ s marathons. I could see at least 7 helicopters hovering over us, most of them full.

At 10:30 sharp the howitzer went off and we started up the Verazzano Bridge. It was very difficult to run 9 minute miles, there were so many runners. We crossed the one mile mark in 10 1/2 minutes. The view of Manhattan on the left and the open sea on the right were beautiful! Soon the helicopters were a mile or two away as the leaders quickly opened a gap between us.

In Brooklyn, we first encountered the black neighbourhood, and then Spanish, then Hassidic Jews. Tens of thousands lined the streets to cheer us. I took drinks often and at the 6 mile mark was dead on 9 minutes per mile. At the Pulaski bridge half-way point my time was 1 hour 58 minutes 45 seconds.

The loneliest part was running over the Queensboro Bridge; no spectators at all but a soft carpet under our feet all the way. Then into Manhattan where there were thousands more spectators lining both sides of a narrow (8 feet) passageway applauding us and handing us drinks and oranges.

At the 17 mile mark I was still on target at 9 minutes per mile. For the first time it was getting tougher; I was starting to feel tired. Into the Bronx a blister on the inside of my left ankle breaks. Then back into Manhattan and I start to notice the voices for the first time. Many of them are telling us how far we have to go and what time we can still do by getting to the point in this time.

Into Central Park there is lots of cheering. We didn’t have our names on our chests only our numbers; mine was 3004, and many cheered me by calling out my number: “Only 2 miles to go”. I realize that I have almost done it and I’m so happy and tired, I almost start to cry.

Someone calls out “Anyone who is here now can still break four hours”. I pick up the speed a little but don’ t have much energy left and finish in 4 hours and 11 seconds. Several people I don’ t know congratulate me and I feel great. I have accomplished something very difficult after a year of training.

Someone hands me my medal, a bottle of Perrier, one of the sponsors, and the foil cape to keep me warm. I feel ecstatic and hope to run another race even faster.